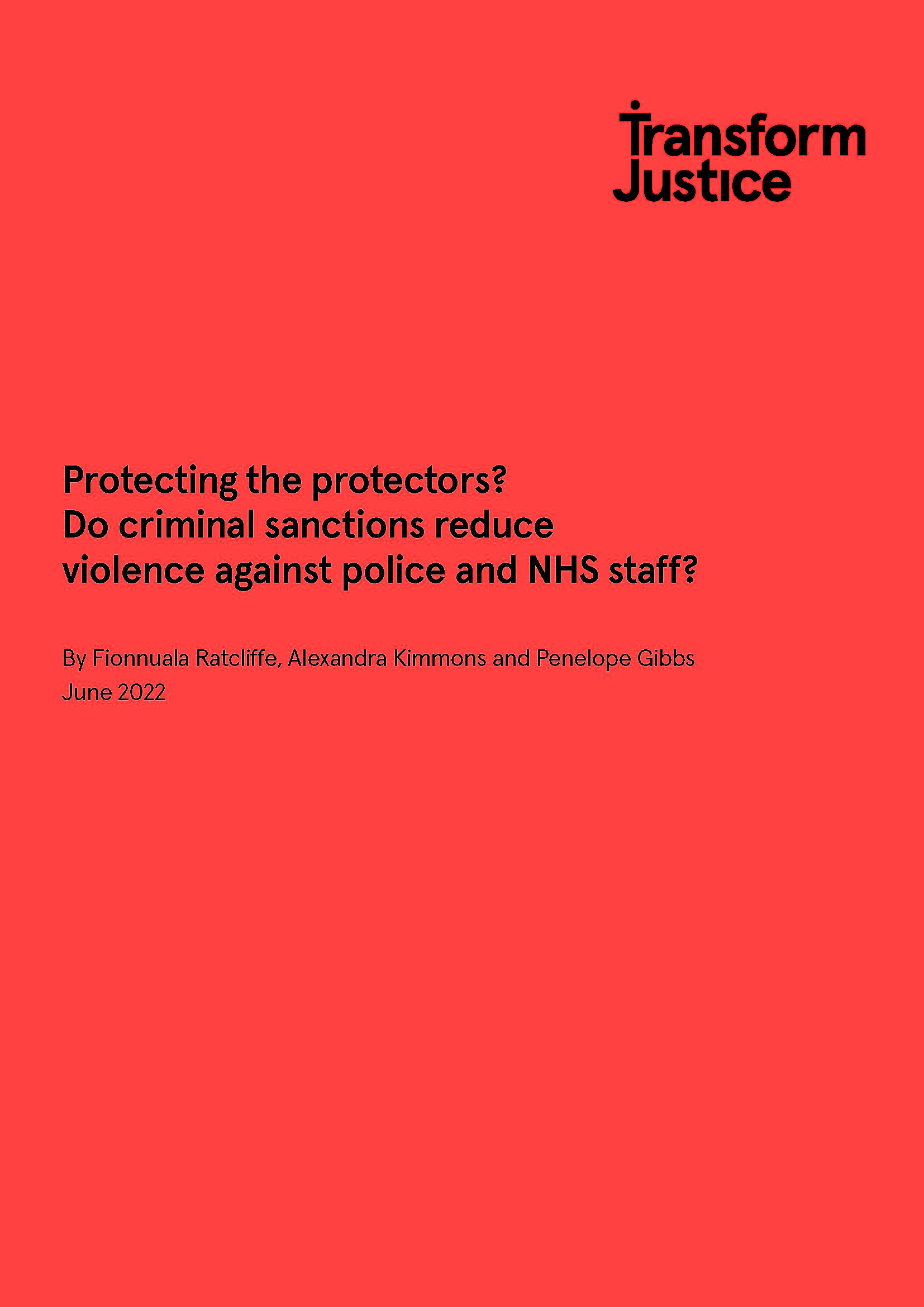 “I was in general hospital being treated for self-harm. Staff attempted to restrain me as they wanted to move me to a different room. They grabbed me by the knees and wrists. I was accused of hitting one of the staff although I don’t remember doing it, I was just trying to get away.” (person accused of assaulting an emergency worker)

Attacks on police and NHS workers appear to be increasing. Prosecutions for this offence have increased almost 50% since 2018.  The government wants to “protect the protectors” and has increased the maximum criminal sanction for the offence of assaulting an emergency worker twice in the last four years. It is now two years imprisonment – four times the maximum penalty for common assault. But increased punishment has not reduced abuse. As the government admitted in its impact assessment for the new legislation, there is only “weak and mixed” evidence for the deterrent effects of the new sanctions.

A new report ‘Protecting the Protectors? Do criminal justice sanctions reduce violence against police and NHS staff’?‘ by national charity Transform Justice suggests that, not only are increased criminal sanctions ineffective in deterring this crime, they are also sweeping more people with mental health conditions, cognitive impairments and/or who are neurodivergent into the criminal justice system. People who are schizophrenic or in mental health crisis may lash out at police or nurses without being fully aware of what they are doing. People who are autistic may panic when they feel police are invading their personal space.  Transform Justice estimates that at least two-thirds of those accused of assaulting emergency workers have a serious mental illness or are neurodivergent.

Prosecution is a blunt instrument for dealing with such vulnerable suspects. If they are prosecuted, huge amounts of time and money are spent obtaining and discussing specialist reports. Many defendants have their cases withdrawn or, if convicted, are sentenced to an absolute or conditional discharge – a sentence given only for crimes where the mitigation is very strong. These outcomes do nothing to reduce abuse or help victims move on from an assault.

Transform Justice recommends that employers in the NHS and in the police should spend less time pressing for prosecutions and more time tending to the welfare of staff who have been abused. Staff want their harm to be recognised, access to counselling, and for violence and abuse to stop. Only some want their day in court.

But how do we stop the rise in abuse asks the report? Better access to mental health services would help of course. Transform Justice also suggests that both NHS workers and police need better training in dealing with neurodivergent people and people who are mentally ill. If police and NHS workers were better trained in de-escalation techniques, many of these incidents could be avoided in the first place.

Penelope Gibbs, Director of Transform Justice said “Nobody goes to work to be a punchbag. But harsher punishments aren’t protecting our protectors, they’re just sweeping more vulnerable people into the criminal justice system.”

23
Jun
Protecting the Protectors? Do criminal justice sanctions reduce violence against police and NHS staff?
We use cookies to ensure that we give you the best experience on our website. If you continue to use this site we will assume that you are happy with it.OkPrivacy statement