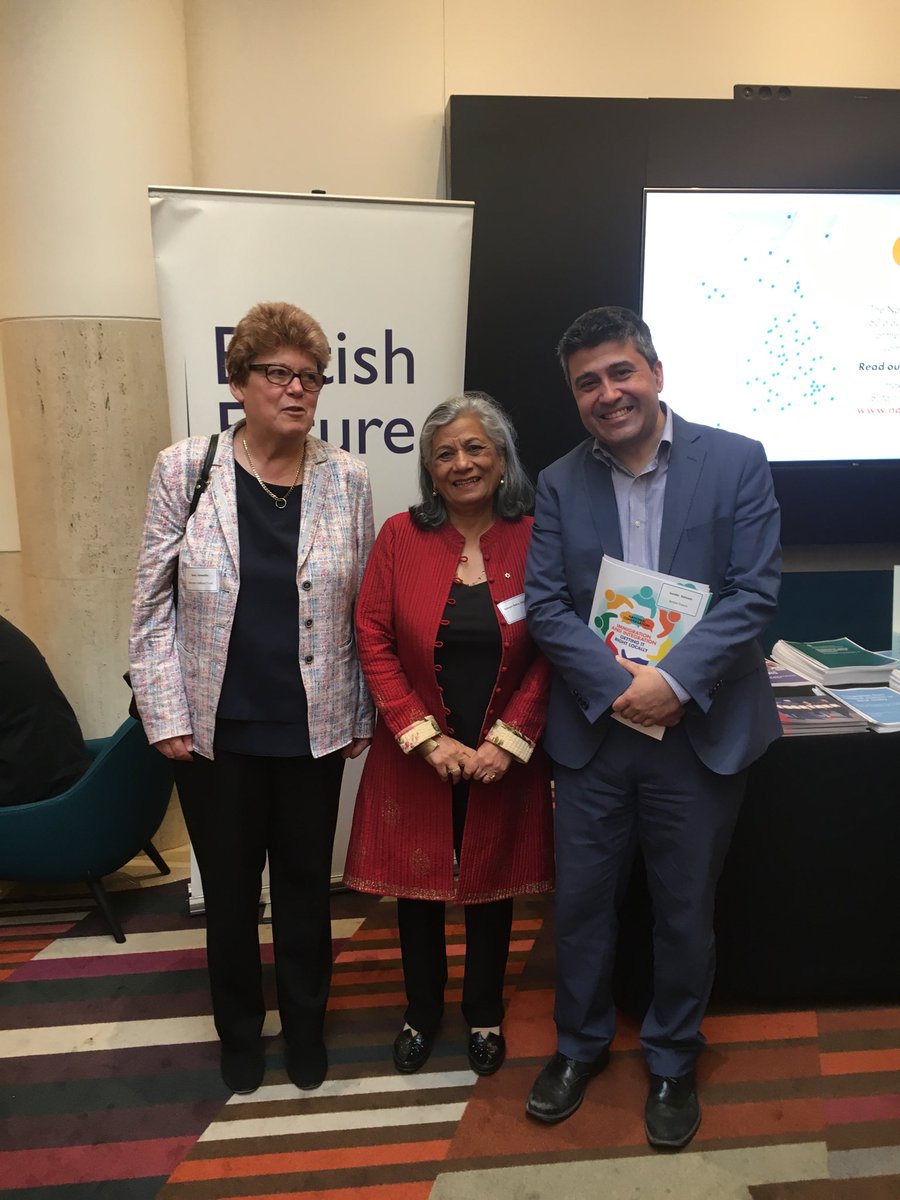 “I have always maintained that whilst immigration is a global and national phenomena, integration is a uniquely local experience.”

Senator Ratna Omidvar delivered one of the keynote speeches at the ‘Integration and Immigration: getting it right locally conference’ on 17 May organised by British Future, Hope not Hate and Barrow Cadbury Trust.  She spoke of her journey from India to Canada via warring Iran, her pride in sponsoring refugees and how integration must work on a subjective person to person level to have an impact on a national scale. Below is an abridged version of her speech:

It’s humbling being asked to come to another country to share my insights. But it is also perhaps an opportunity to engage in a bit of two-way traffic, because our system has borrowed so much from yours, in particular our parliamentary system. When I became a Senator I understood better how much we base our parliamentary democracy on yours.  So this is an appropriate opportunity to say “Thank You” and give something back.

I may not have all the answers or the silver bullets that you desire.  What I do have is a story to tell, some ideas to share, and a perspective of how my own country manages migration flows and continues to stitch immigrants and refugees into its national fabric.

I was born in Amritsar, India – home to the famous Golden Temple. After studying at the University of Delhi, I headed off the West Germany to continue my education there.

One day I went hiking in the Alps with some other foreign students. By the time we climbed back down I had met my life partner. He was from Iran, and so after we completed our studies, rather naively as it turned out, we wanted to give his home country a try.  Bad idea. We arrived in Tehran during one of the bloodiest and most turbulent periods in Iran’s history. 2500 years of Persian monarchy was coming to an end with the Islamic Revolution and the overthrow of the Shah.  We knew we had to get out but it wasn’t going to be easy. We had a child by that time – still a baby – and all air routes out of Iran were closed.

So we decided, with all the courage of youth, to pack our bags, load up the baby carriage and make the long, cold journey by road. After two horrific days, we found ourselves in a small square room on the border of Iran and Turkey. On one side of the room: a portrait of Ayatollah Khomeini. On the other: a portrait of Mustafa Kemal Ataturk, the founder of the Turkish Republic.

We were cold, very tired and very afraid. And frankly, we were telling whatever lies we could in order to get to the other side of the room. We omitted the fact that we had money crammed up the legs of the baby carriage. We did not tell the guards that our papers were not quite real.

They ripped everything apart – the diaper bag, the milk powder – but they did not think to check the carriage.

We made it to the other side. And through Turkey we eventually made it to Germany. Unfortunately they were not accepting a lot of immigrants at the time, so we eventually applied to Canada – and were rejected. But we persisted and thanks to friends in Canada, we were eventually sponsored and made that initial journey across the Atlantic.

My story is not special. The details differ from one migrant to another, but we all share similar experiences. We all leave one life to find another. And we all faced the inevitable struggles from rejection to reinvention; from prejudice to persistence.

Every immigrant stars in the same four part serial: Arrival, rejection, then slow reinvention and renewal, and then hopefully “redemption”, if not in our lives then through the lives of our children.

Canada has always been seen as a nation of immigrants, and therefore of diversity. In a recent survey, it was further determined that Canadians believe that multiculturalism, diversity and inclusions are our most notable contribution to the world. So now it is less about peacekeeping and foreign aid and more about who we are and how we get along with each other. Multiculturalism, and the acceptance of immigrants and refugees now stand out as the best way Canadians feel their country can be a role model for others and as a way to exert our influence on the global stage.

Here’s the good thing about Canada: The results of immigration in the long term are very encouraging. The children of immigrants enjoy an exceptional rate of success in school, outpacing the success of native-born Canadians. Sixty per cent of immigrants buy homes within six years of arrival. And rates of intermarriage are growing, particularly in urban centres. Many of my country’s future elites are second and third generation immigrants. This will surely continue.

The bad: Canada often struggles to recognize foreign credentials. There is a common mythology that internationally trained doctors and scientists drive our taxis and Ubers in Canada. Name-based discrimination is another barrier to entry for newcomers. In Canada you are 35% more likely to be called for a job interview if your name is Matthew and not Sameer. This limits our success greatly.

And the ugly truth is that Canada still struggles with racism, particularly towards black Canadians and indigenous peoples. Extreme poverty and rising inequality are perhaps the greatest indicators of this ugliness.

Moving to public opinion, Canada and the United Kingdom have a lot more in common than you think with respect to public opinion on migration. And while Canada is seen both within its borders and around the world as a beacon, people often need to see that multiculturalism is truly working in order to receive their stamp of approval.

Work by Canadian academics Randy Besco and Erin Tolley point to a rough rule of thirds. About one third of Canadians hold clearly negative views. They want less immigration and think minorities should receive less accommodation.  Another third are greatly idealistic about immigration and diversity, and are vocal in their rejections of proposals that negatively target specific groups. The middle third are ‘conditional multiculturalists’. They will accept those who accept their national values. For instance, they might favour restrictions on the niqab in citizenship ceremonies, but not while accessing public services. They worry that some Muslims pose a threat to public safety, but they also think Muslims deserve equal treatment.

I have always maintained that whilst immigration is a global and national phenomena, integration is a uniquely local experience. People may leave one country for another, but it is the local experience that will be felt first hand.  I am talking not just of the newcomers. I believe that the conversation about integration and inclusion has to shift to include three players – first the newcomers, second all existing residents in the local community, and third local institutions. These are the groups that help or hinder integration.

There is a rich narrative of local best practices from the world that lends itself to this idea. Cities of Migration the world over are experimenting and succeeding with unique local expressions of innovation. For example, Copenhagen teaches cycling culture to newly arrived Muslim women. Barcelona equips local residents with facts to dispel fake news about migrants. And Toronto matches immigrant job seekers with mentors drawn from the same occupation.

Good ideas have long legs, and some of the best ideas have indeed originated from right here in London: The London Living Wage is just one example. And because local communities are far better placed than their national governments to nimbly borrow and adapt ideas, the London Living Wage has been embraced by prominent labour unions and activists across Europe and North America.

Conversely, your country has just borrowed an idea from my country that deserves your attention. That idea is to allow everyday citizens to privately sponsor refugees to come to their country.

In Canada, any individual can act as de facto guarantors for refugee families during their first year of resettlement. Before these refugees arrive, these volunteers raise funds to provide them with the necessities – food, shelter. And they develop resettlement plans to ensure these refugees have the support they need to belong and thrive in our country. This can include anything from English language training and enrolments in public schools to weekend museum trips.

As an individual who has privately sponsored refugees, I can attest that it is among one of the most rewarding experiences in my life.

Today, more than 250 communities across Canada are home to these refugees.  One in three Canadians either sponsored a refugee directly or knows someone who has. This I think, is a modern nation building strategy, more about social cohesion and less about national infrastructure.

This is social engineering at its best.

So in closing I want to leave you with five good ideas which may be helpful:

First, governance matters. Now more than ever the pursuit of the national interest needs to carry through to the local level. And the procedures that govern our processes need to be clear, consistent and easy for the public to understand.  It is this confidence that has led the public to support public investments in integration.

Second, local institutions matter. We know that migration issues are local issues at their core. It is libraries, hospitals, schools, parks and bus stops that facilitate or hinder integration.  My favourite examples come from Toronto, where libraries are no longer just a place to borrow books, but they also double as job search clubs. In Dublin, it was the bus service that launched an anti-racism campaign.

Third, human nature matters. Time and time again it has been proven that barriers between migrants and other residents fall when they have opportunities to come together. In these times of post-truth or post-fact, we have to fight emotion with emotion. Reason over emotion alone will not prevail. And what better to bring emotion and empathy to the front than through human relations.  So a bit of social engineering here would be great.

Fourth, language matters. Words give shape to our values and since values shift over time, so must language. Roughly two decades ago, a small whisper campaign started in Canada. It sought to displace the word “foreign” to “internationally-trained”. Just think of the shift in your minds when you use one word instead of the other.

Perhaps the time has come to shift some of your language. Here and in Europe, the terminology of the day is “migrant”, whereas we in Canada use the word “immigrant”. Possibly because we are more comfortable with the permanent nature of the phenomena.  I have just come from Berlin, from a conversation about diversity and integration. I have left Berlin with a conviction that the words need to shift. Diversity is nothing more than a demographic reality. Integration is no more than a two way or three way process over time. The end goal is always inclusion. As someone has said, diversity is a fact, inclusion is a choice. What good is integration, if it does not guarantee inclusion – economic, social and political inclusion?

And finally, narrative and stories matter.  I have always been a big believer in the power of role models and champions. However recently I have begun to develop a slightly more nuanced view. I believe now that the story of the Immigrant as Hero is ultimately not very helpful. For one, heroes are exceptional, for another most heroes will have feet of clay.  We are far better advised to portray immigrants as ordinary people: as taxpayers, as neighbours, as good parents. We need to normalise them and make them more human and therefore more likely to be your friend, your buddy or a member of your book club.