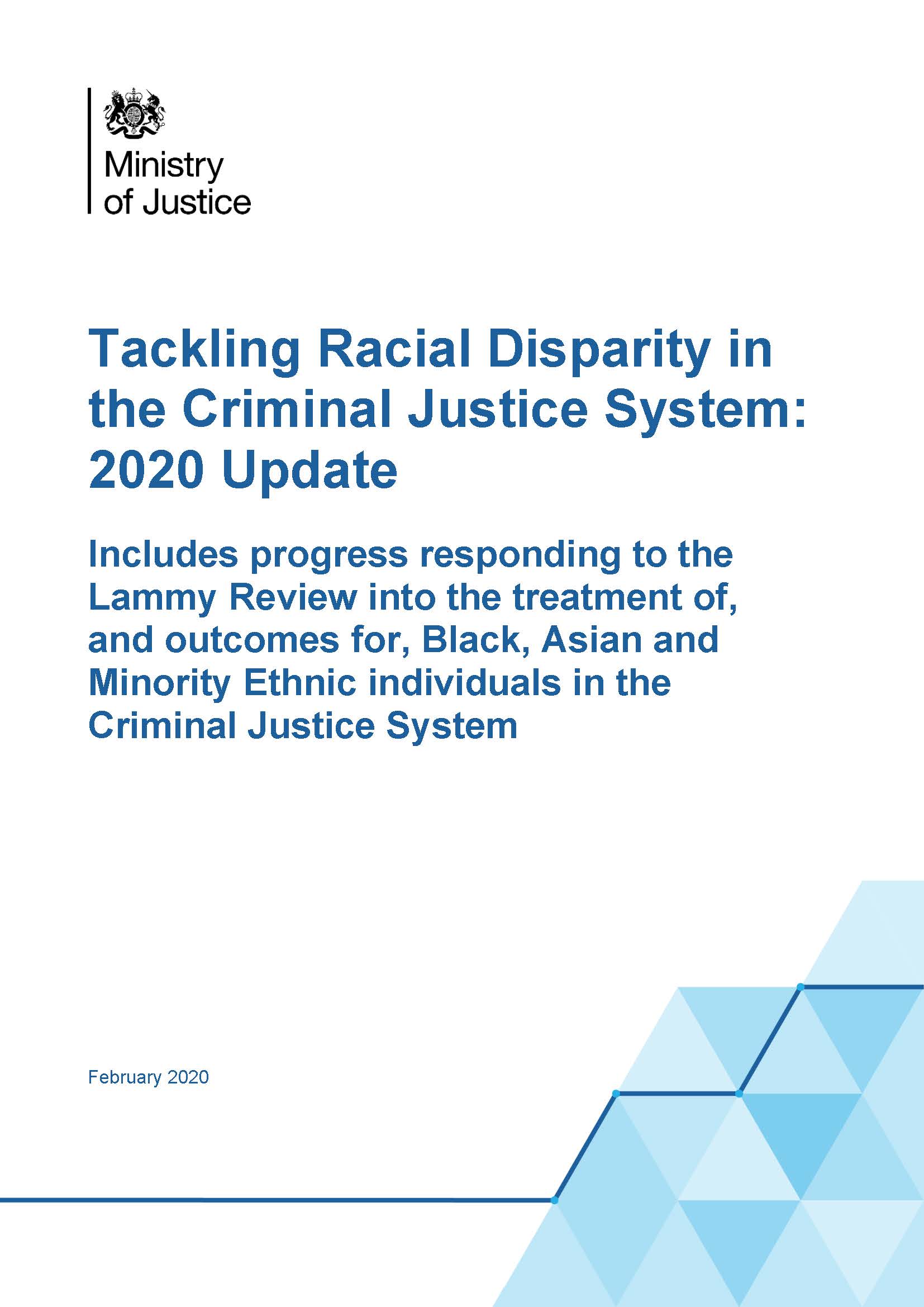 The Barrow Cadbury Trust works to ensure the criminal justice system takes into account the distinct needs of particular groups in society: children, young adults, women and people from Black, Asian and Ethnic Minority[1] communities.  The Trust works with government, with universities and with campaigning organisations to implement evidence, improve the way services are designed and achieve better social and economic outcomes.

Earlier this month the Ministry of Justice produced its second update report ‘Tackling Racial Disparity in the Criminal Justice System: 2020 Update’, two and a half years on from the launch of the ground-breaking Lammy Review.

It’s refreshing and encouraging to see, in the foreword, a clear statement of intent from the Lord Chancellor and Secretary of State for Justice Rt Hon Robert Buckland MP.   His final sentence could have been said by the Trust, or many working in the criminal justice system: “racial disparities do not just hold back individuals in our society; they prevent us as a nation from realising our true collective potential. That is something this government is determined to change”.

What communities have been saying for years is now being gradually raised in policy making circles, for example involving the community in local justice, and better empowering parents of children to support their child’s journey through the justice system. The report has an extensive section on lack of trust between, for example, Black communities and the police and sets out principles to address some of the root causes.   It, and we, acknowledge that trust, once broken, is very hard to fix. While the guidelines are welcome, it will require transformational change reaching into front line service delivery to change long standing (and justified) lack of trust.  Services and policy-makers need to continue to talk to communities and listen to their answers.

There is a growing awareness in the MoJ of ethnic bias in ‘risk perception’ and the impact of conscious and unconscious bias on experience and outcomes.  It is important to understand the impact that strategies to counter serious youth violence (SYV) have and will continue to have on Black communities and that proposed new approaches are almost certain to replicate and entrench current inequalities, undermining other good work.

The CPS should be given credit as it seeks to challenge the lazy and over-used and racialised term ‘gang’. Group offending does take place, but establishing that a joint enterprise has occurred and whether there is gang membership needs to be evidenced before a ‘gang’ case can be put before the court.

The success of the Parole Board’s recent recruitment drive, which saw BAME people make up 48% of appointees to the Board, creating an increase from 5% to 13% overall, shows that dramatic results can be achieved, but it takes commitment, leadership and putting a real focus on equalities.

Similarly, we were pleased to see the Sentencing Council scrutinising the outcomes for BAME people and women in Crown Court judgements.  Disparity was shown between the likelihood of immediate custody for BAME offenders and white offenders, with Asian offenders receiving longer custodial sentences. The Sentencing Council reported that there is no clear evidence why these disparities occur.  It is time to work from the premise that they occur because of bias and discrimination and work from there to reduce biases in the judiciary, in the court process and in the sentencing guidelines.

However, there are omissions; the report fails to address some of the big change projects taking place in the Ministry.  For example, secure schools hardly get a mention; there is no mention of the new prisoner categorisation system.  Can the MoJ say that these initiatives have been thoroughly impact assessed, with the data put into the public domain for scrutiny?  Currently there are significant reforms taking place in the delivery of probation services; are equalities front and centre to its design?  If not, this will be a missed opportunity.  There needs to be recognition in this Update report of the difficulties of contracting and awarding grants to small specialist community organisations. If we want better outcomes and better engagement the MoJ needs to develop the procurement services that can contract small organisations who are best placed to develop relationships with its users.

One area where urgent action is needed is the criminal records regime. Lammy Review recommendation 35 on criminal records is very clear and relates to the impact of unemployment among ex-offenders, those on Community Orders, under supervision in the community, and those whose conviction is spent, not just people serving custodial sentences. If the MoJ is not going to pursue this recommendation it should clearly articulate why it isn’t.  However as the Trust said in its response to the 2018 Update report the Government should look again at its position on criminal records and take into account the findings from Baroness McGregor Smith’s review on Race in the Workplace.

It is very disappointing to see the same response to recommendation 34 on the sealing of criminal records as provided in the MoJ’s 2018 update report.  This recommendation is too important to bury in the long grass.  In California there are bold reforms by the justice system, which is preparing to take 66,000 marijuana convictions off the record.  Even a slight nod in this direction will be a long way from where we are now. The #fairchecks campaign led by Transform Justices and Unlock make the case for a disclosure system that is fair and gives people a genuine chance of moving on and contributing fully to society.

Too many of the future actions the Trust proposed in 2018 have gone unanswered in this update such as:

The Justice Select Committee held an evidence gathering session in 2019 on the MoJ’s implementation of the Lammy Review recommendations. Following the re-election of Sir Bob Neill MP as Chair, there is an opportunity for the Committee to build on its one-off session and launch a more detailed inquiry on building trust in the CJS with BAME communities. This Committee can keep the pressure on the Government to deliver in full the Lammy Review’ recommendations and help ensure the positive activities described in the MoJ’s Update reports are delivered.

As Stormzy presciently articulated during his set at the Glastonbury festival when he sampled David Lammy MP’s words “when recidivism rates for black boys are 46% something isn’t working!” it is right that the attention of the next generation is focused on the failings of our public sector.

[1] Although the term BAME is used in this response the Trust is well aware that such a catch all term cannot do justice to all the varied and valuable experiences people from different ethnic backgrounds have. Where possible we try to be as specific as possible.