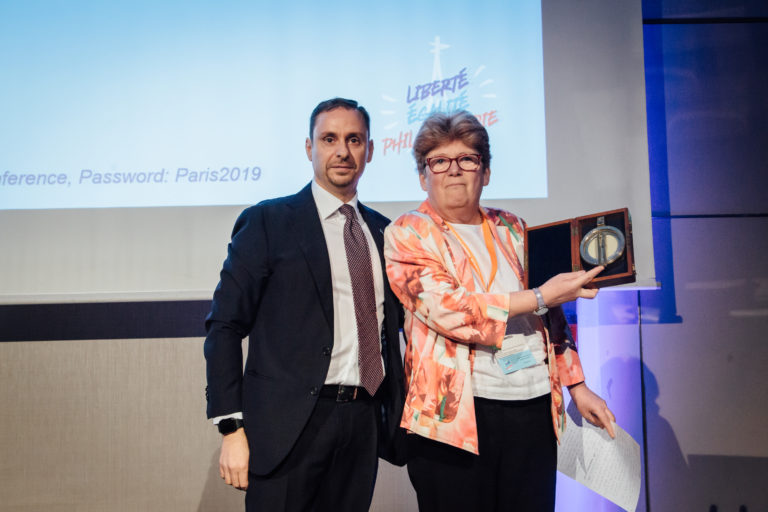 Sara Llewellin, the Chief Executive of the Barrow Cadbury Trust, has been awarded the EFC Compass Prize at the 30th EFC AGA and Conference in Paris last week. This is the fifth ever prize awarded since its launch ten years ago and Sara is the first woman to receive this recognition.

Sara, a member for many years of the EFC’s Management Committee, Governing Council and various networks and working groups, has been recognised for her prominent work not just for Barrow Cadbury Trust, but for the EFC and wider philanthropic sector in Europe. According to the EFC: “Sara embodies the qualities and values that are at the root of the organisation she leads: speaking truth to power and striving for collaboration, engagement, independence and innovation and could not be a more deserving recipient of the award”.

After being presented the award by Massimo Lapucci, the EFC’s Chair, Sara emphasised that this award was not only a recognition of her work, but recognition of the effort and toil of everyone she has worked with.  She went on to pay tribute to all of the women who had come before her in the EFC community, for laying the groundwork, and for helping her in her early years.  This award was for them she said, and it demonstrated that ”the sisterhood is powerful!”.

The EFC Compass Prize recognises those who have made outstanding contributions to, and ongoing support for, the development of the European philanthropic sector; the pioneers, navigators and visionaries who have broken the mould of European philanthropy, both through their relationship with the EFC as well as with their peers. Read more about the Compass Prize and previous recipients.

During the Annual General Assembly Sara was also unanimously elected as Vice Chair of the EFC , replacing the outgoing Klaus Wehmeier, Chairman of the Board of Trustees, Körber-Stiftung.