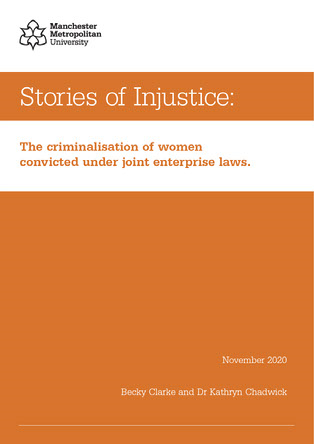 A new report written by academics at Manchester Metropolitan University reveals fresh evidence about the number and experiences of women in prison under laws of complicity known as joint enterprise.

The report, Stories of Injustice is an examination of the process of criminalisation for women convicted under joint enterprise laws. The use of this law in England and Wales remains hidden, but this research reveals for the first time that at least 109 women have been sentenced to long prison terms for joint enterprise convictions. Seeking to understand how and why this occurs, the report details harrowing examples of the experiences of these women.

The youngest girl in the research was charged at 13 years old, while the oldest woman serving a joint enterprise sentence is 68 years old. Many (34%) were young adults (18 to 25) when charged, while there were six who were children under 16 at charge. The majority have convictions for serious violent offences, with over three quarters convicted for murder or manslaughter offences. This is despite the fact that in no cases did the woman or girl use a deadly weapon, in 90% of cases they engaged in no violence at all, and in half of the cases they were not even present at the scene.

Yet most of the women are serving long or indeterminate prison sentences at an average of 15 years, with almost half (47%) serving life sentences of up to 30 years. Despite a 2016 Supreme Court ruling which found the law had “taken a wrong turn” when it comes to joint enterprise, this research reveals that secondary parties (as they are known in the law) continue to be convicted as if they committed the offence, with 16 of these women convicted since the 2016 ruling. The convictions date back to 2004 and the women are from towns and cities across England and Wales. Campaigners from JENGbA, the family led national campaign, believe there are likely more women’s experiences to be uncovered.

Joint enterprise is a set of legal principles grounded in common law and originating from Victorian times. Its use has re-emerged in the past 30 years, allowing many individuals to be convicted for one offence even where the roles of secondary parties are marginal, or evidence of their foresight is uncertain. Stories of Injustice offers an academic analysis of how and why women are convicted in joint enterprise trials.

According to the analysis across the country prosecutors rely on myths, gendered, class based and racist stereotypes and stigmas to convict women. For example, the report says, in one case the judge commented on a female defendant as “a feckless mother of unfortunate children” for whom “the state picks up the pieces of your fecklessness”. The judge made no remark on the parenting by the men in the dock despite two of the three male co-defendants being fathers, one to a child of the female defendant.

The report finds that this characterisation of women is central to their convictions. Established by prosecution teams, echoed by the media and in some cases the Judge, girls and women are presented as feckless mothers, manipulative love rivals, jilted lovers, or ‘honey traps’. For women from Black, Asian and minority ethnic backgrounds these are layered with racist narratives, including tropes about gangs and ‘alternative’ lifestyles.

Like many other women in prison, the accounts of those convicted under joint enterprise captured significant experiences of marginalisation and trauma. In almost one half of the cases there had been a repeated failure by the police and other agencies to protect them from violence as children and adults, or for many women, to respond to their health or care needs. Often this important context was minimised or ignored during trials, or worse used to damn women for their silence, fear or inaction.

In one such case the female co-defendant had experienced years of sexual exploitation, but the prosecution argued that she ‘manipulated men for sex’.

“My abuse was used by the prosecution to paint a bad picture of me. I think also when used by the defence it didn’t help. I just don’t think they believed me.” (Jenna)

“I think I was judged more harshly because I was a woman. Intelligence was equated with ability to deceive and manipulate… and I was judged on my lifestyle and my addiction.” (Willow)

The report calls for urgent action to prevent this continuing injustice, including:

The research concludes that the current criminal justice system is inadequate in ensuring justice and accountability, addressing harm and preventing further violence.