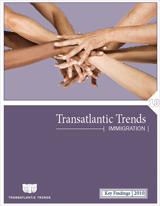 A new Barrow Cadbury Trust co-funded public opinion survey shows that as North American and European countries continue to recover from the global economic crisis, there is a nearly consensus view that governments are managing immigration poorly.

For the first time, there is also evidence that respondents whose personal economic situation got worse in 2010 were more likely to fear immigrant competition in the labor market.

According to the third-annual ‘Transatlantic Trends: Immigration survey of public opinion in North America and Europe’, majorities in the United States (73%), the U.K. (70%), Spain (61%), France (58%), and the Netherlands (54%) believed that their government was doing a poor job in managing immigration. Only Canadians were split, with 48% feeling positive and 43% responding negatively about their government’s handling of immigration. In the United States (67%) and U.K. (63%), respondents also said immigration policy would affect their vote.

“Transatlantic Trends: Immigration is a wake-up call for the governments of receiving countries,” said GMF President Craig Kennedy. “The survey shows that North Americans and Europeans have strong opinions about immigration policy, what works, and what doesn’t. But the survey also shows that the more one is exposed to immigrants, the more one feels positively toward them.”

There has been significant media coverage of the report, including: