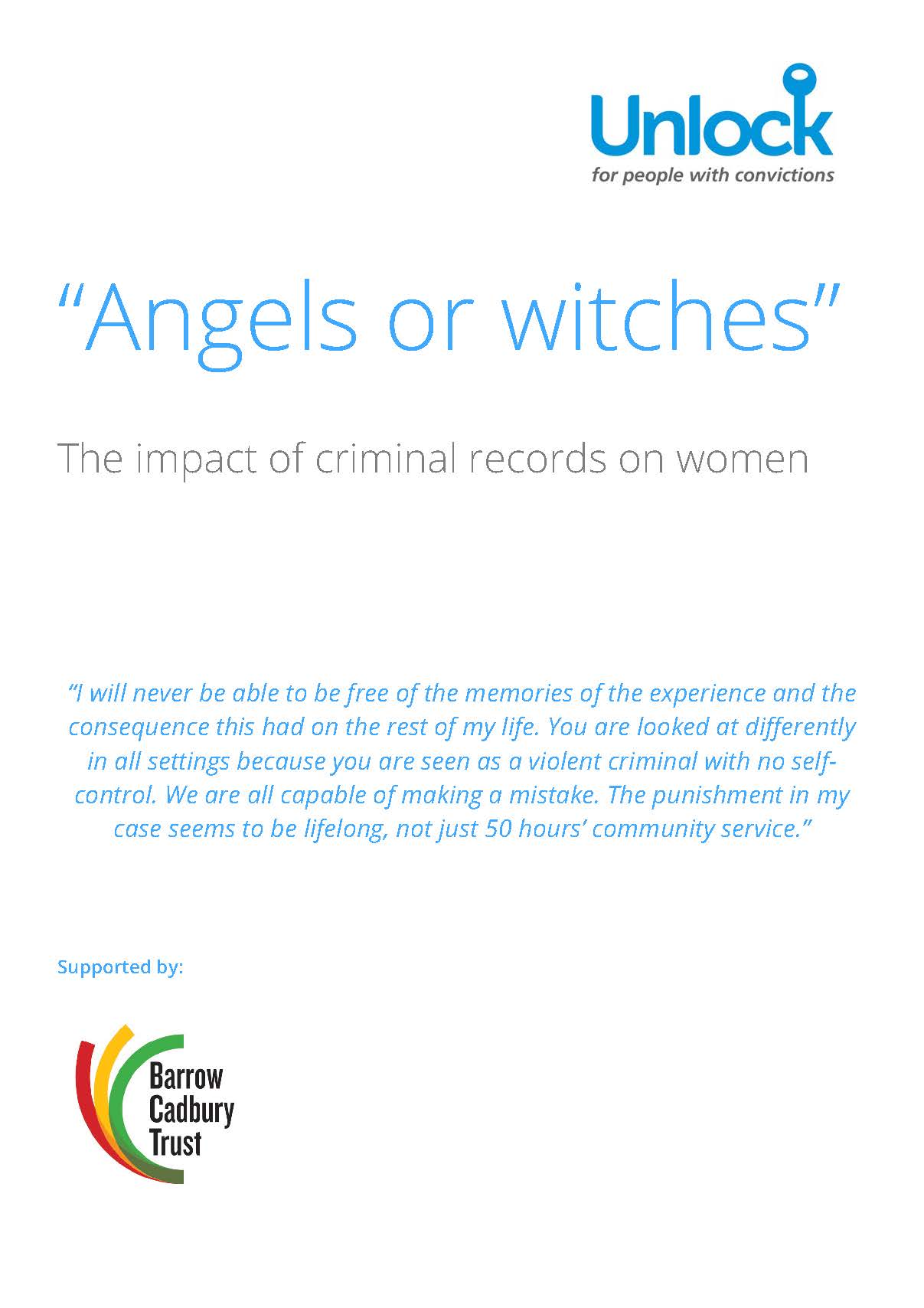 While women overall are less likely to have a criminal record than men, those women who do are more likely to face barriers when accessing employment according to the report, “Angels or witches”: The impact of criminal records on women, published today by the charity Unlock.

The report, which brings together the voices and experiences of women with criminal records alongside data on employment and criminal record checks, highlights the need for dedicated strategies to address the post-conviction problems women face.

The vast majority of women surveyed as part of the research (86%) cited employment as a problem, with 63% saying it was the biggest problem they faced. One woman said: “I’ve been struggling to get work. I can’t work in finance or admin roles for local government like I did previously as I need an enhanced DBS. I now work in low paid cleaning jobs but struggle to find cleaning work as all school cleaners, doctors surgeries need enhanced DBS checks.”

By analysing data on the number of criminal record checks that disclosed convictions, the researchers found that, although less likely than men to have a criminal record, women are almost twice as likely to have their criminal records disclosed on a DBS check. One possible explanation for this is the higher level of checks required for traditionally female-dominated roles, such as care work and education.

Over half of women surveyed felt that being a woman made their post-conviction problems worse, with many citing additional stigma face by women with convictions. One respondent said: “Women are still treated as either angels or witches, there is no in between. Women with convictions are demonised in ways that men never have been”.

What is also clear in the report is that for many women, their convictions exist alongside significant trauma; nearly two thirds (59%) of women surveyed reported having experienced domestic abuse at some point in their lives. A tenth said they had been a sex worker at some point in their lives, and 31% had experienced addiction or substance misuse. And yet there is a dangerous lack of support or understanding to enable these women to move on positively in their lives – they are simply handed the stigma that comes with a criminal record.

Dr Rachel Tynan, Practice and Policy Lead at Unlock, said: “These findings clearly demonstrate that women face specific barriers and challenges because of their criminal record – and that these aren’t properly understood. That’s why we’re calling on the government to conduct a full root and branch review of the criminal records system, including the proportionality and impact on women and people with other protected characteristics.

“We also need to see a dedicated employment strategy that recognises and responds to the specific challenges faced by women leaving prison and on probation. If women are being locked out of the jobs they have trained for because of minor convictions, how are they supposed to make a positive contribution to society?”

16
Jun
Perspectives of a Prison Officer